The Captain of the Blacks Fresco

Some of the most iconic images from Knossos, such as the Priest-King of the Lilies and the Blue Ladies, continue to mislead lovers of Minoica and distort our modern views of the ancient Minoans.  Sir Arthur Evans, having convinced himself that the Minoans were a peace-loving, matriarchal society of idealists and artists--and having subconsciously done this to escape the atrocities and upset of the Balkan Wars and Great War of the last turn of the century--employed a father-son team of artists both named Emile Gillieron to reconstitute the fresco fragments he found during his excavations to reflect his view of ancient Knossos.

In a much earlier post, I mentioned that the Priest-King fresco was cobbled together from pieces of at least three separate frescoes.  In this post, I examine a fresco which has excited debate among archaeologists and Afrocentrics, and everyone in between: The Captain of the Blacks fresco.

This particular fresco is taken as evidence that black Africans were present and enjoyed positions of military authority at Knossos.

I want to state right now that this blog is no place for racist rhetoric.  Leave any negative comments to yourself.  This post has nothing to do with the racial origins of the Minoans, or racial superiority, or any such nonsense.  I have never looked at either the Minoans or Mycenaeans in terms of their race.

That said, I have no doubt that Minoan Crete, being a crossroads linking Asia, Africa, and Europe, routinely saw black Africans coming from Libya, Nubia, and farther afield.  Even though no physical evidence of negroid-type human remains have been found at Minoan sites (intact Minoan burials are very rare to begin with), black Africans would have come to Crete as other peoples did, as traders, mercenaries, and settlers.  I see no reason why blacks would not have been among the Minoan military elite; the Nubians were great archers, and in later times the Cretans became renowed for their excellent archers. 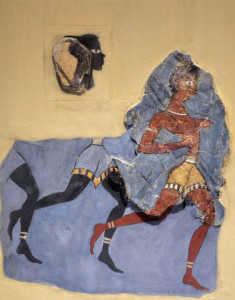 It's very possible that the "Captain of the Blacks" fresco depicts black Minoan soldiers under the command of another, but a great deal of the reconstructed fragment is hypothetical.  You have to look closely to see which parts are the actual fresco fragments.  There is evidence for the one black soldier in the surviving piece depicting the thigh and kilt edge, and in the uppermost piece showing a dark neck and back of the head, but the third man, the black man who is just a pair of legs and a kilt, is a complete invention.

The Gillierons did this sort of thing with Evans' consent and complicity; the latter knew perfectly well that a number of the ivory figurines finding their way into American and Canadian museums were frauds, because in his multivolume The Palace of Minos he goes out of his way to talk around the objects' lack of provenance.  He is also known to have visited the workshop where the forgeries were produced; in the 1960s archaeologist Leonard Woolley collected anecdotes of Evans' questionable practices and published them as part of his book about Minoan and Mycenaean archaeology: The Bull of Minos.

In short, Evans had a preconceived notion of the Minoans in general and Knossos in particular.  His father, Sir John Evans, had been disciplined and objective, but the younger Evans tended more toward sentimentality and subjectiveness.  He created in Knossos his vision of a Minoan world that probably never existed.  He created a cult of a great Cretan Mother Goddess to replace the mother he had lost at a very young age, goddess who may or may not have existed as Evans imagined her.

There must have been black Africans at Knossos, just as there were probably Egyptians and Hellenes and Canaanites and Libyans and Babylonians, even though the physical evidence for them living in Crete is scant, indeed.  What we see at Knossos is more the modernist reinterpretation of one man that a reflection of the world the Minoans themselves experienced.
Tags: archaeology, artwork, forgeries, frescoes, knossos, minoans, mycenaeans, race, sir arthur evans
Subscribe